Montreal poet, raised between two railways and a shipping canal, Robert “publish” his poems by offering them to pretty women and to his friends. Robert has also written and directed a blues record and video-poems which were screened at festivals in Europe, Asia and America. Under the pseudonym “Robert Paquin, Ph. D.” he taught at various universities in addition to indulging in literary translation and film translation / adaptation.

A face or a body I seek,

Of angel-, man- or womankind,

With both eyes closed and gaze asleep,

Turned toward the secrets of the mind.

I seek a body or a face

Smiling with open lips and eyes,

Woman or man, in that sweet grace

Shared by the blissful and the wise.

A face, a body and a soul

On skin exposed, beyond control,

Bodies and souls are born to light;

Bodies are sculpted into stone;

Souls slip away to endless night;

Two hands in prayer are clasped as one.

Robert Paquin wrote this poem inspired by the paintings of André Desjardins. Jerome Langlois, has subsequently set it to music. Marie-Nicole Lemieux (contralto) interprets this song in a short film that the author wrote and directed with the help of ACIC program of the NFB.

The same film was shown at film festivals:

Robert told us: “The contralto voice could be that of a man or a woman. The poem is designed to never identify the “I” as a man or a woman. You never know if that man or woman speaks to another man or another woman. This ambiguity emphasizes that androgynous faces of the artist’s paintings. 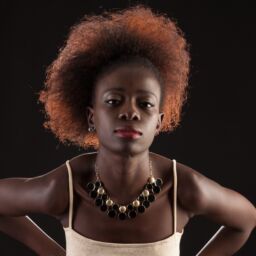 Not so long ago, Angélique or Blacky Gyan landed in Quebec with suitcases full of clothes ‘’made in Dakar’’, diplomas and work experiences in finance that she acquired in France and Senegal. Aware of all the opportunities ahead of her, thirty-year-old Angélique has not stopped getting conversations started about her ‘’countless projects’’. With a strong entrepreneurial instinct given to her by her parents, she became a serial social entrepreneur that can proudly hold the title of model, cofounder of the concept-store Cheliel, founder of R Magazine, one of the TravelEaters behind LekkTukki, cooking addict, amateur fashion designer, etc. Immersed in Montreal’s flourishing world of art, culture and entrepreneurship, the epicurean African woman that Angélique is finds herself very involved in ‘’her communities’’.